Confetti & Chaos – this is the worst wedding reception you’ll ever go to… and everyone is invited!

A 5-star dining experience with fun and mayhem bursting from the seams of a wedding dress. This completely immersive and entirely original comedy pulls out all the stops – including quick-fire character changes and quick-fire laughs. It’s another mad interactive show by the makers of the international hit, Faulty Towers The Dining Experience, and it’s coming your way – appearing in Goulburn in June 2019.

Audiences become guests caught in the crossfire of this classic English celebration gone wildly wrong. Organised by the bride’s mother, this 2-hour party is full to the brim with surprises and less-than civilised guests, with secrets spilling out as family members bust in, bust up and bust a move. It’s a night that comes crammed with comedy and chaos, and even a 3-course meal, a confetti-filled experience that features four top-flight performers playing nine characters in a whirlwind of laughter, love and tears.

- ‘Pumped to bursting with energy, filled with hilarity and a riot of epic proportions, it is impossible not to fall madly in love with this immersive event.’ BroadwayWorld, Edinburgh Fringe

- ‘A ground-breaking show… If you ever get an invite, don't turn it down!’ Bournemouth Echo, Lighthouse Poole

- ‘No shortage of laughs… riotous immersive comedy’ The Stage

Tickets: $55.00 pp (plus booking fee) – all tickets include a two-course meal plus cake for dessert (special diets catered). 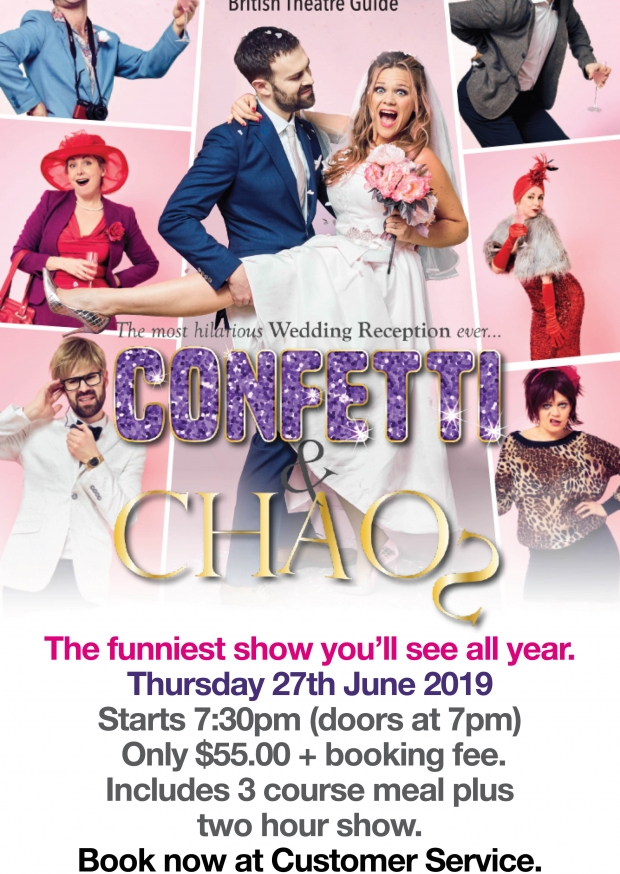