A lot has happened since The Wolfe Brothers burst into millions of lounge rooms around the nation in mid 2012 when they were voted into second place in the final of the prime time television show Australia’s Got Talent.

Since those weekly TV performances in 2012 they have toured the USA, written and recorded in Nashville, for the last 6 years have toured all over Australia with Lee Kernaghan and have become one of the hottest live acts in country music. Their newest album release, Country Heart, is their 4th studio album and was recorded in Sydney with Aussie producer Matt Fell. All 4 Wolfe Brothers albums have debuted at #2 on the ARIA Country chart. Their last 12 singles have hit #1 on the country charts in Australia.

2018 was a huge year for the band culminating with their Country Heart album being nominated for Best Country Album at the 2018 ARIA Awards.

The first half of 2019 will see the band headlining their own shows around Australia and also performing at a number of festivals. Mid year the Wolfies hook up with their mate Lee Kernaghan and will again be touring with LK on his massive 50 date Australian Tour. Somewhere in the middle of all this touring the band will head to Nashville and Canada to write their next album.

The Wolfe Brothers continue to strive to deliver the best shows and albums they can to their fans. They are most comfortable performing live and anyone who has seen them will confirm that this is a band that puts 110% into every show they do.

Don’t miss The Wolfe Brothers Live on their No Sad Song tour with special guest artists. Andrew Swift will be supporting on this show so you know you are in for a good night, www.onepagelink.com/andrewswift.

Tickets are only $37.50 + booking fees so they will sell out fast so get in quick.

The Wolfe Brothers are 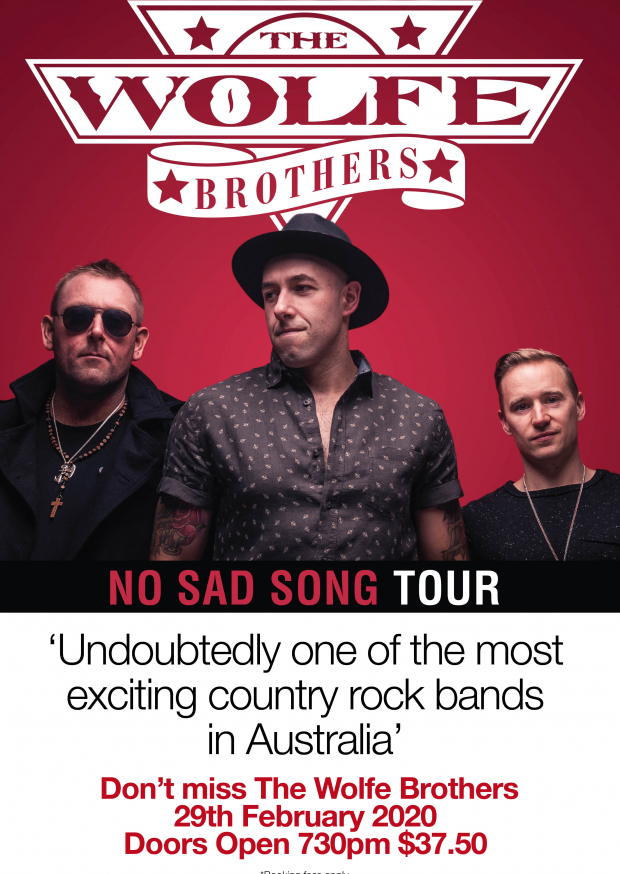