A FAREWELL TO DORIS

A tribute to the legendary Doris Day

The world recently lost one of its biggest stars with the passing of Doris Day. A legend of stage, screen and song, Doris died aged 97, leaving behind an incredible body of work, including iconic movies and unforgettable songs.

Doris Day, “the girl next door”, had millions of fans around the world, none bigger than chart-topping Australian singer songwriter Melinda Schneider, who has recorded two albums of Doris’ songs, co-written and starred in a theatre show based on Doris’ life, and done sell-out tours celebrating Doris’ work.

“I was so saddened to hear the news of the passing of the amazing Doris Day,” Melinda said.

Melinda Schneider has now announced the 2019/20 national tour A Farewell To Doris, a heartfelt tribute to Doris Day.

This nostalgic concert celebration will feature the wonderful Young At Heart Orchestra  and include such timeless hits as Que Sera,Sera, Sentimental Journey, Everybody Loves a Lover  and Secret Love plus classic songs from the movies Calamity Jane,Love Me or Leave Me and The Pajama Game, as well as a number of Doris’ big band standards.

Melinda’s love affair with Doris Day started when she saw Calamity Jane when she was just eight. “I thought she was the best of everything a woman can be, and when I grew up I wanted to be just like her,” Melinda says. “Whenever I revisit some of her old movies, I’m transported back to that place, a place of happiness and pure joy.”

In 2010, Melinda released the acclaimed tribute album Melinda Does Doris – A Tribute To Doris Day,which debuted at #1 on the ARIA Jazz and Blues chart, remaining there for 9 weeks.

The following year, Melinda starred in her own hugely successful original theatre show, DORIS, Doris Day – So Much More Than The Girl Next Door, which she wrote with David Mitchell of Dusty/Shout  fame. The show played to packed houses across the country, including a sold-out show at the Sydney Opera House Concert Hall in 2012.

Before the show was staged, Melinda sent Doris the script. “I wanted to make sure she was happy with the way we had portrayed her, and she came back giving me the thumbs up, which made me very happy.”

Following the successful capital city seasons, Melinda created a concert production of the show, Melinda Does Doris: A Tribute to Doris Day,which has toured to appreciative audiences in cities and towns all around Australia.

In October 2016, Melinda released a second Doris album, Melinda Does Doris … Again – The Movie Songs. And in June 2017, she teamed up with Tom Burlinson for another sold-out performance at the Sydney Opera House Concert Hall as well as at Melbourne and Brisbane, celebrating the hits of Doris Day and Frank Sinatra in a show called Young At Heart.

Melinda is saddened by Doris’ passing, but proud to present A Farewell To Doris, knowing that Doris’ work will continue to bring joy to audiences of all ages. “Doris was multi-talented, a true triple threat: a world-class singer, dancer and actor. But it is her beautiful spirit that will stay with me. Doris was so likeable and exuded such sincerity and joy and all that is good. There will never be another like her”

“Singing her songs and telling her incredible story of resilience has been an absolute honour, and I’m happy to have the opportunity to celebrate her wonderful talent with audiences once again.”

”Melinda Schneider is a slightly buried treasure … hers is a smoky voice of quite some distinction. One gets the impression it can adapt to any purpose or style to which she might see fit to apply it. It certainly works when she brings it to Doris Day’s table” – Crikey

“Who knew there was so much more to Melinda Schneider than just being an extremely talented multi Golden Guitar Award-winning Australian country music singer? In Doris, Melinda Schneider gets to show a whole other side to her talents by capturing the essence of Doris Day, managing to exude all of the warmth, sincerity and sweetness that was the real Doris” – Stage Whispers 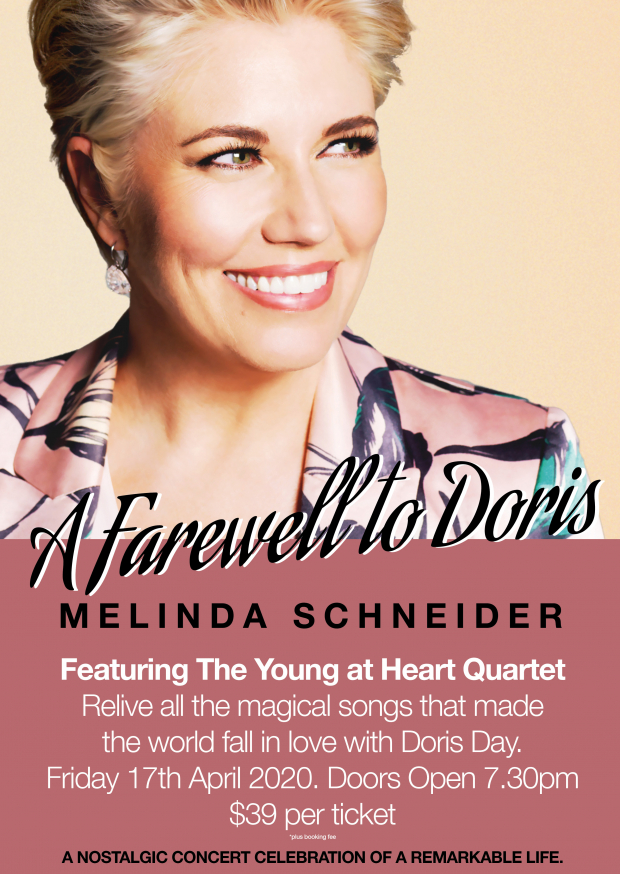