Charlie and his five-piece band play to sell-out audiences and are well known for keeping concertgoers enthralled with his heartfelt and telling lyrics and his very human anecdotes.

His music rages from inspirational to country, from ballad to anthem, and he truly is as entertaining on stage as he is melodic. His own personal song writing blends easy on the ear, folk, country, inspirational, ballads and blues with a strong and often personal lyric content. This, mixed with his wit and repartee has led to a winning formula, which had made an impact on so many professionals and fans alike. His success has led to his work being covered by several artists including Jack Jones, Pat Boone, Foster and Allen, George Hamilton IV, Daniel O’Donnell and many more.

Charlie has received rave reviews for his shows, particularly Liverpool Summer Pops Festival where the Liverpool Philharmonic Orchestra accompanied him and his band before and sell-out crowd of over 4000, also his headline slot at Birmingham’s sold out charity night at the Symphony Hall, not to mention playing to packed houses around the globe.

Charlie has just won every award possible in the UK country scene and are too numerous to mention individually, however, they comprise best songwriter, best song, best male vocalist, best album and international country album of the year. He has also received a nomination as best global country artist in the CMA Awards in Nashville.

He has a following in Australia, where he has toured successfully five times in the past decade, brought out by his good friend, Terry Gordon O.A.M.

Many of his albums have topped the country charts as well as getting into the British pop charts. He is a true and immensely talented star, having sold well over a million albums.

One song in particular was to transform his life. Charlie wrote ‘What Colour Is the Wind,’ which tells the story of a young blind child’s attempts to envision the world.

As a result of Gerry Anderson playing a track radio in Northern Ireland, the song came to the notice TV chat host Pat Kenny in Dublin, who invited Charlie to perform on his Kenny Live Show (TRE January 1995).

The program received its biggest ever response following Charlie’s appearance and a week later, Charlie’s album, also called What Colour Is the Wind, was suddenly at #1 on the Irish charts, removing Garth Brooks from the top spot and fighting off fierce competition from Celine Dion and The Chieftans.

This was a dream come true for Charlie and since then, he has gone from strength to strength and is now of the all-time biggest selling artists in Irish music.

Charlie’s talent and recognition has also led to many other notable events, one invited to close Ireland’s Special Program Paraplegic Olympics with his own song, Special. He was also George Hamilton IV’s special guest for three nights on the Grand Ole Opry.

As well as being blessed with a wonderful voice, he has an abundance of talent for songwriting. He has had many jobs throughout his life, finally finishing as a teacher, which has giving him a great grounding to draw on life’ experiences to write his classic songs.

Through these songs, he can have you shedding tears of sadness, turning into tears of joy, to total elation with your feet tapping and wanting to dance.

The statement Gerry Anderson of BBC-TV made says it all “Charlie is like a good wine, He matures, quietly over a long period of time. When the cork is popped, it’s well worth the wait.

With tickets only $49 for this once in a lifetime opportunity make sure you book early as tickets will sell fast and you will miss out!!!! 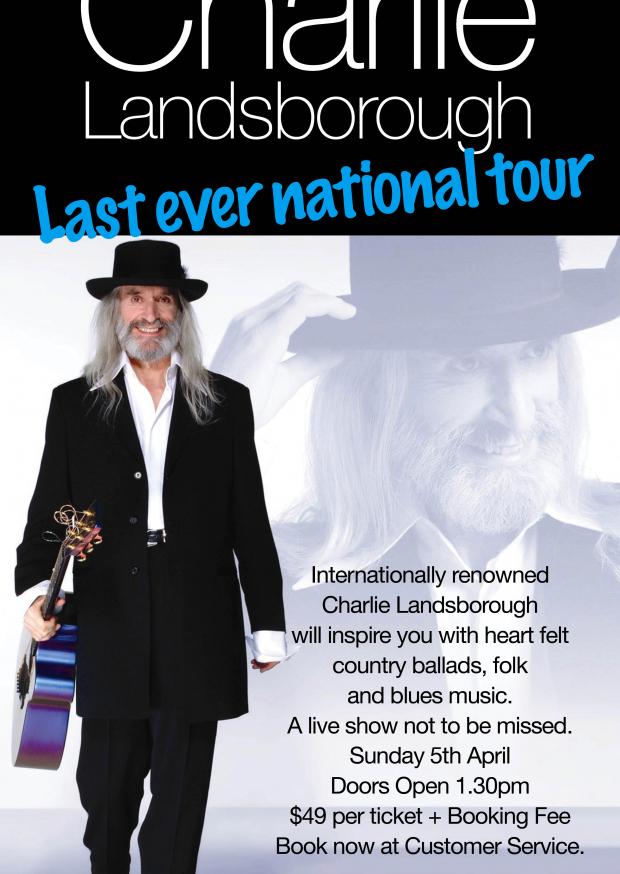